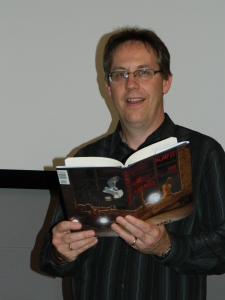 What do you understand by the word ‘numinous’?

I think of it as a way of expressing the deeper realities of life itself. The ‘numen’ refers to a spirit or deity, so numinous is a term for describing a personal and profound feeling of overwhelming awe (that shudder of conflicting, mysterious experiences). You could call it ‘spirituality’ or emotional hypersensitivity. Rudolf Otto coined the term to mean the presence of the divine, like that moment in ‘The Wind in the Willows’ when Mole and Rat meet the great god Pan. It’s uncertain, ephemeral, and inexplicable.

How long did it take you to write all the stories in your collection?

I wrote them over a period of 4-5 years whilst also working on other projects, and doing my job in the ‘real’ world. I like to have several projects on the go at any one time.
Did you have a collection in mind when you were writing them?
No, they were all produced independently and then collected together for this publication. I do believe the ‘numinous’ link is there in much of my writing though, so it seemed like the collection could stand together under that ‘theme’ or trope. The title story is definitely a key to understanding my work.

How did you choose which stories to include and in what order?

I was always keen to confound genre boundaries so it became important to include slipstream, horror, comedy, the absurd, romance … I don’t want to be considered a writer in one genre. David Rix at Eibonvale suggested the first and last stories and then I chose to mix up styles and genres. Different people seem to like different stories, so I’m interested in all the opinions, tastes and reactions. In the end it’s subjective.

You’ve written a non-fiction title which deals with Michael Moorcock and the concept of multiverses, which to my mind seems to inform some of the stories in ‘Glimpse’. Can you explain the idea and how it relates to your fiction?

Moorcock uses the same characters, appearing and reacting in different times, worlds and planes of existence – which appeals to me. Moorcock also refuses to be pigeon-holed as a writer, celebrating the imagination and originality over a particular style or tradition. I also take great pleasure in twisting things until they become absurd, unexpected or surprising. I want to experiment with perspective as this constantly challenges the reader. No fiction should be simplistic or without reason (although entertainment and distraction is fine in itself).

What does the word “story” mean to you?

Our lives are ‘stories’ which overlap and interconnect. Like our own lives, stories must be allowed to evolve and develop with each generation. We must never limit the story as an art-form, but continue to challenge, provoke, entertain, shock and amuse each other. By doing this humans are forced to rethink what we know and never become complacent.
What concerns me in our culture is that stories, myths and art are seen as secondary to knowledge and facts – as if being creative is just for kids or for deluded folk escaping from something. Stories are a way of helping us to understand the greatest truths in our histories and cultures. Just because something is a story or fiction doesn’t mean it cannot contain an important truth.

It’s often difficult to find a market for ‘weird’ fiction such as is exhibited in ‘Glimpse’. How have you got on in this respect?

The small press market is a brilliant place to get published and find your feet as a writer because those individuals, usually working at their own expense, are willing to take risks that larger publishers refuse to. The dedicated people behind small presses believe in great writing rather than just in making a large profit. It is also more personal and less mechanical or faceless. Most of my stories eventually find a home but it does take some research and determination. As a writer you have to be willing to take a few risks yourself and you need a certain belief in what you’re producing.

Do you have a “reader” in mind when you write stories?

To be honest I write the kind of stuff I want to read. When I write something with sexual or disturbing content I’m always aware that my dear parents or certain friends might not approve or appreciate my work, but I have to believe in the integrity of my writing and remember I’m an adult and that challenging readers is important. When I write YA fiction I am much more conscious of the reader and I’ll have to consider the response of a teenager who has ‘better’ things to do than read books.

Is there anything you’d like to ask someone who has read your collection, anything at all?

I’d like to know which other authors readers might compare my writing to. I’d also love to ask each reader what inspires them to be creative.

How does it feel knowing that people are buying your books?

It’s fantastic. It’s an extension of me and it feels like I’ve exposed an intimate part of myself! That’s nerve-racking, but also intensely exciting. Once the book goes out to the public you feel insecure – especially if people you know read it (or worse don’t bother) and then say nothing to you. Good reviews are a wonderful support and inspiration to keep going. I’d like to thank The Short Review for their kind words – it’s hugely appreciated.

What are you working on now?

I’ve lots of projects on the go. I’m half way through a ‘weird’ YA novel; revising my Michael Moorcock book ready for re-publication later this year; I’m experimenting with a screenplay of my last novel, ‘Myopia’; there’s an unpublished novel set in Nigeria during the Biafran War; more stories … always more stories…