” A Glimpse of the Numinous is an interesting and challenging short story collection, because each story is different and handles a different subject. Jeff Gardiner writes fluently about feelings, sexuality, mental illness, relationships, sensuality, mythical happenings, religious themes etc (some themes may be difficult for certain readers, but others are more accessible and it’s easier to read about them). It’s a bit difficult to describe some of these stories, because the reader needs to experience them personally in order to fully understand them, but it’s possible to say that these stories and their strange happenings will intrigue readers.

In my opinion Jeff Gardiner shows great promise in writing speculative fiction, because his stories are genuinely fascinating, weird and original. His stories contain horrible happenings, strange characters and all kinds of emotions from love to hate, so they’re quite difficult to forget after reading. It’s nice to read Jeff Gardiner’s stories, because he writes unflinchingly about several different difficult things (he doesn’t shy away from difficult subjects, but handles them easily and without fears).

I was impressed by Jeff Gardiner’s use of English. He writes beautiful prose and he’s capable of changing his writing style when needed. I have to mention that Heartwood is a good example of a beautifully and emotionally written story (it isn’t a long story, but it’s a wonderfully told story).

My favourite stories are A Glimpse of the Numinous, Bred in the Bone, 351073, Heartwood, Phobophilia, Gull Power, Delirium Tremens, Dionysus and Past Away. I think that the author shows lots of potential in these stories. A Glimpse of the Numinous is a fantastically weird story, which explores sexuality and mythical things. Delirium Tremens reminds me a bit of Clive Barker’s visceral stories, because it’s an unsettling story, which is told from two different perspectives (it’s a powerful horror story). Phobophilia is one of the best new horror stories I’ve read, because it’s a truly unsettling story about a guy becomes obsessed with death. 351073 is a comfortingly spiritual story about a man whose daughter becomes fascinated by numerology (I liked how the author wrote about the daughter’s fascination for numbers).

The author also shows talent for adding bits of inventive humour to his stories. The slightly sarcastic humour adds a nice atmosphere to certain stories. For example, it was fun to read what Sophie thought about TV channels in Past Away. I also enjoyed reading about the main character’s exploding wives in Writer’s Block.
Before I write the final words of this review, I’ll mention that the cover art by David Rix fits this collection perfectly. I like the cover art very much.

With the opening of Disney film John Carter it seems appropriate to re-evaluate Edgar Rice Burroughs’ book A Princess of Mars – source of the film and now a hundred years since its first incarnation as a short story.

Edgar Rice Burroughs (1875-1950) is often considered a hack writer. He admittedly wrote for a quick profit using a formula derived from H. Rider Haggard and Jules Verne to develop what is sometimes now known as ‘genre fantasy’; and if he’s not the man who invented sword and sorcery, then he definitely was the one to popularise it.

Certainly no one can deny his fertile imagination and his prolific output. His novels are thrilling adventures set across unexplored continents, worlds and galaxies; and as Burroughs is economic with language, every novel contains guaranteed, non-stop action. Even if his prose is sometimes awkward, the vividness and originality of his ideas are sometimes breath-taking.

Born in Chicago, Illinois, Burroughs served in the Cavalry as a teenager, having lied about his age and then after various jobs, including being a cowboy in Idaho and a gold prospector in Oregon, lived in poverty before taking up writing. His first magazine serialisation to be published was ‘Under the Moon of Mars’ in 1912, which became the novel A Princess of Mars (1917), leading to ten more ‘Barsoom’ books, that follow John Carter and his children on Mars. Tarzan of the Apes also appeared in 1912, the first of twenty-five adventures involving the Lord of the Jungle. Burroughs’ ‘Pellucidar’ series also proved popular, whilst his The Land That Time Forgot inspired a cult film co-scripted by Michael Moorcock.

The Barsoom books are early examples of ‘science fantasy’ and critics continue to argue whether they are fantasy or sf. A Princess of Mars (1917) tells of John Carter, a Confederate cavalry officer who becomes a warrior hero after being astrally projected onto Mars (‘Barsoom’), which is inhabited by green and red people. Carter soon learns the language and explores the various cultures on the red planet, rescuing and falling in love with a beautiful, naked human-like Princess, Dejah Thoris. The aggressive green Tharks stand fifteen feet tall and have four arms and tusks protruding from their mouths, but Carter is a swordsman nonpareil and soon has their respect, eventually helping to win battles and thus unite the warring factions, to become himself a warlord of Mars.

Purporting to be John Carter’s manuscript we are told that what we have in our hands is “a chronicle of the strange events that befell me during the ten years that my dead body lay undiscovered in an Arizona cave”. Transcending his own body, he seems to be magically transported to Mars, symbolically the planet named after the god of war, with whom he empathises: “I closed my eyes, stretched out my arms towards the god of my vocation and felt myself drawn with the suddenness of thought through the trackless immensity of space”. The rest of the novel is pure sword and sorcery as Carter escapes imprisonment, discovers his ability to leap great distances, fights duels, explores the dystopian cultures and fulfils his rightful destiny.

Aside from the green and red people, Barsoom is also inhabited by creatures such as the eight-legged thoats, the vicious white, hairless apes and Carter befriends the faithful frog-headed calot, called Woola. The Barsoomians have no sense of family, laying eggs that are hatched away from the protection of parents and with their devotion to courage and physical strength, life is described as “a hard and pitiless struggle for existence upon a dying planet”.

Following the Tharks’ philosophy that “he does not labor for what he can wrest in battle from others”, Carter rescues the Princess of Helium and eventually finds his way through various fights to the land of the red people who are more technologically advanced, having discovered two extra rays of colour in the Martian spectrum that give propulsion to aircraft and atmosphere to their world.

After some romantic introspection and a climactic battle that leads to a triumphant union of the two cultures the ending is also cluttered with a seemingly pointless near catastrophe. The main criticism aimed at the book is that it attempts to put too much into its 150 pages, but that is as much to do with Burroughs’ enthusiasm and active imagination.

In the sequel, The Gods of Mars (1918) John Carter returns to Barsoom ten years later to discover that the gods, such as Issus, are impotent. Then in the ensuing books he and Dejah Thoris have children; Cathoris the son who rescues Thuvia, princess of Ptarth, and the daughter, Tara of Helium, who gets caught up in a deadly game of live chess.

Some of these books seem naïve and simplistic, whilst some contain original invention and even philosophy: for example the ingenious concept of the phantom bowmen of Lotharian in Thuvia, Maid of Mars (1920). Jav of Lothar explains that, “It is really our giant minds that defend us, sending out legions of imaginary warriors to materialise before the mind’s eye of our foe” and confides that their enemies are “killed by the power of suggestion”. Lothar is inhabited by two factions: etherealists who believe that nothing and nobody actually exists “other than as an intangible, invisible mentality”; and realists who “know that the mind has the power to maintain substance” and who therefore eat food and even produce waste to maintain the appearance of reality. Their secret lies in the fact that they understand that “death was merely a state of mind”. This is a clever and witty conceit, playing on various philosophical riffs.

There is a very clear formula that has been created here: heroic man somehow finds himself in a prehistoric/alien (anthropoid) culture or lost race; he is captured for breaking some social taboo; he falls impetuously in love with a beautiful girl, usually a princess, who initially spurns his advances; he escapes and fights monster/beast to prove his heroism and gains honourable social status; helps the race in a battle or war and at the end it transpires that the girl always loved him from the beginning. They marry and he becomes a king.

Edgar Rice Burroughs will not be remembered for his vivid characterisation, clever use of language or for his support of feminism, but he will remain famous for his fertile imagination and for being a teller of action-packed adventures, which is a very important role to play in a culture where imagination is being eroded away. But as Lin Carter explains; with Burroughs’ writing, “its glamour lingers long after one has forgotten the author’s shortcomings” 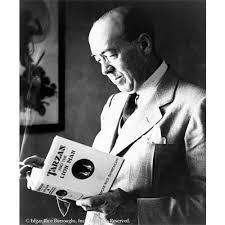