I’m delighted to post an extract from the beginning of Emma Rose Millar’s FIVE GUNS BLAZING. It’s a thrilling adventure that includes pirates, slavery, crime and love (but not particularly in that order). 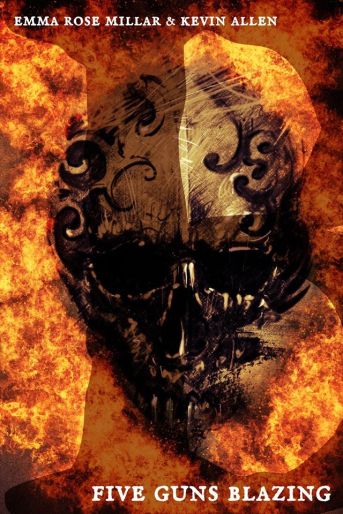 “You have been brought before me again, Mrs Beedham!” The magistrate looked at my mother over his spectacles. She must have considered him an idiot if she thought that a flash of her ample cleavage and of her fine eyes would win her any favour. He took the monocle from his breast pocket.

“Theft of a handkerchief, soliciting, affray, the attempted theft of a lady’s purse.”

Her lips twisted at the corner into a little smile, which she quickly straightened, but she looked almost pleased with herself as the charges were read out. I could picture her clear as day, proudly emptying her stolen trinkets out onto our mattress, all shiny and gleaming in the dipping glow of the rush-lights, as a child might present a parent with a painting or piece of needlework. My mother’s eye was as keen as a magpie’s for anything sparkly; she could pick out at ease the glint of a cufflink or a hairpin in the dullest of crowds and would glide her way after it, completely unseen. Later, she would stand back to admire the baubles and bits of finery with her hands on her hips and a look of satisfaction in her eyes, then quickly her face would fall as if she had suddenly noticed they were tarnished or broken and she would snatch them back and wrap them away in her cloth.

Hers was the first case of the day; the beak had seen her at least three times before. Needless to say, my mother was well acquainted with the good magistrates of Holborn; such was her fondness for relieving wealthy ladies and gentlemen of their belongings; handkerchiefs, pocket watches and so on. The magistrate thumbed through a pile of papers on his desk, a history of her sordid misdemeanours, seemingly oblivious to the swelling underclass packing his courtroom, with their poor diction and their sticky fingers. The public gallery was full of them: undesirables and reprobates, sweating, scratching. There were women employed at their needlework, old men dozing, and a girl with some younger children who spread a muslin cloth upon her lap, then proceeded to break up a meat pie and divide it between them. And of course there was me, Laetitia Beedham, the accused’s daughter who had weaved my way through the tangle of legs and crouched behind a man who I imagined might have been a farmer, or gamekeeper. He stood solidly in front of me, cleaning the dirt from underneath his fingernails with a blade.

The court seemed suddenly excited by her outburst. It was all entertainment to them; the law after all is only theatre; it did not matter much if one was hanged or not, it was all part of the drama.

“I only did it for my daughter, who was sick and in need of medicine. My husband’s dead, sir, what is a woman to do?”

I felt a blush burning from my collarbone to my temples, and someone laughed and shouted, “She’s a liar, sir! The girl is the bastard child of two thieves!”

There were gasps and then the magistrate, with his grey brows knitted together and an air of concern upon his countenance, asked, “Where is she now?”

My mother caught my eye for the briefest of moments. “I don’t know,” she sighed, dabbing her cheek with a cotton handkerchief. “We’re all alone and friendless in the world. She’s begging, most probably, on the streets of Holborn, unless someone’s cruelly snatched her and is taking advantage of her as we speak.” She fell into sobs and covered her face though still managing to peep through her fingers at the exasperated gentleman. “I can’t bear to think of what callousness may have befallen her now she has not the protection of her mother! London’s nothing more than a cess pit, simmering with the most ruthless, the most merciless…the…the…”

“See that the girl is rounded up,” said the magistrate to the constable, who quickly jumped to attention, “and repair them to the Florence Street Workhouse so that they might be fed and clothed and instructed in the ways of Christian honesty.” His words hit me like a fist in my chest and I began forging a path back through the jostling crowd, whose whoops and cries had me quite disorientated.

The whole building resonated with a tremendous holler: “Stop that girl!” Then another, and another until the echoes melded together and swelled out in riotous harmony. “A shilling to the man who takes her!”

A woman snatched at my dress. “Come here, you little wretch,” but I wriggled free from her, seeing the door before me and the yellow light from the world outside. Then just as I thought I could make a dash for it, the constable swiped his stick against the back of my knees, taking my legs right from under me. A loud “huzzah” went up from the crowd and I lay on the floor with my cheek pressed against the constable’s boot. “Vipers,” my mother called them. She would have more respect for them had they been paid; everybody had to earn a living, after all. These men did it for the love of it; they were dazzled by the power they had over others, that was all she could think.

“It is clear that you do not have the means to provide for yourself, madam,” the magistrate continued. He banged his hammer against the gavel, and a stout looking man wearing a waistcoat pulled me roughly to my feet. “You will regard this as a kindness, Mrs Beedham, in years to come; do not let me see you here again. I shall not be so lenient next time.”

To find out what happens to Laetitia and Mrs Beedham click on the cover image above or click here.