A lovely new review has just appeared for ‘Igboland’ on NetGalley:

“Set in 1960’s civil war era Nigeria, this book tells the story of Clem a Methodist Missionary and his wife Lydia who settle in Biafra/Igboland to work with the local populous and churches, clinics and schools. The story is told from Lydia’s point of view and grips from the very start with such attention to the smallest details whilst opening your eyes to the cultural, religious and political differences that they are challenged with.

“Set over a few years it shows the strain that a missionary’s wife has as someone without a ‘role’, ie she is not the missionary, but his wife and the search for self-recognition and finding her own identity. However, war, love, the local villagers and illness all drive wedges between the couple and the pressure on their relationship is huge.

“The story is very well written and you are there with them as they face West Africa together and come to terms with their lifestyle adjustments. The author has created something very special here that really gave me cause to want more of this style of writing that’s alive and thoroughly researched.

“A great book that was hard to stop reading!”

My novel ‘IGBOLAND’ is inspired by the photos and tales of my Mum and Dad, and by my Mum’s diary from their six years living in the Nigerian bush. I was born out there in Jos in the middle of the Nigerian Civil War. 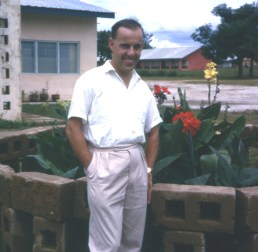 They lived in a bush village called Iga; the only white residents for many miles. Even in the 1960s, they still encountered people who had not seen white folk before.

My Mum felt she could offer a little help by opening a tiny dispensary to help with simple medical complaints. 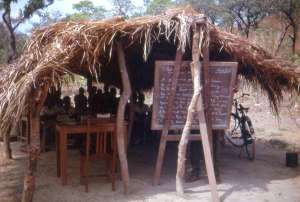 My parents always commented on how friendly, welcoming and happy the villagers were. They were always welcomed, spoiled and treated with the utmost respect. Even though the Nigerian folk had little in terms of possessions, they would often give gifts of yams, chickens or fruit

Below is a picture of the village elders.

The road were treacherous and often just muddy rutted paths. If Mum and Dad’s Beetle ever broke down, locals would appear magically from the bush to help out.

Mum and Dad are still in touch with the Omafu family out in Nigeria, who run a maternity clinic, supported by kind donations from my parents.

I felt I should end with a photo of myself out in Nigeria. Here goes:

An early shot of Jeff Gardiner, author of ‘IGBOLAND’, a novel of passion and conflict inspired by my parents’ years in West Africa.

To buy a copy of ‘IGBOLAND’ click on the cover image below. 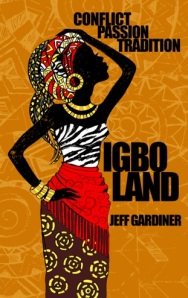